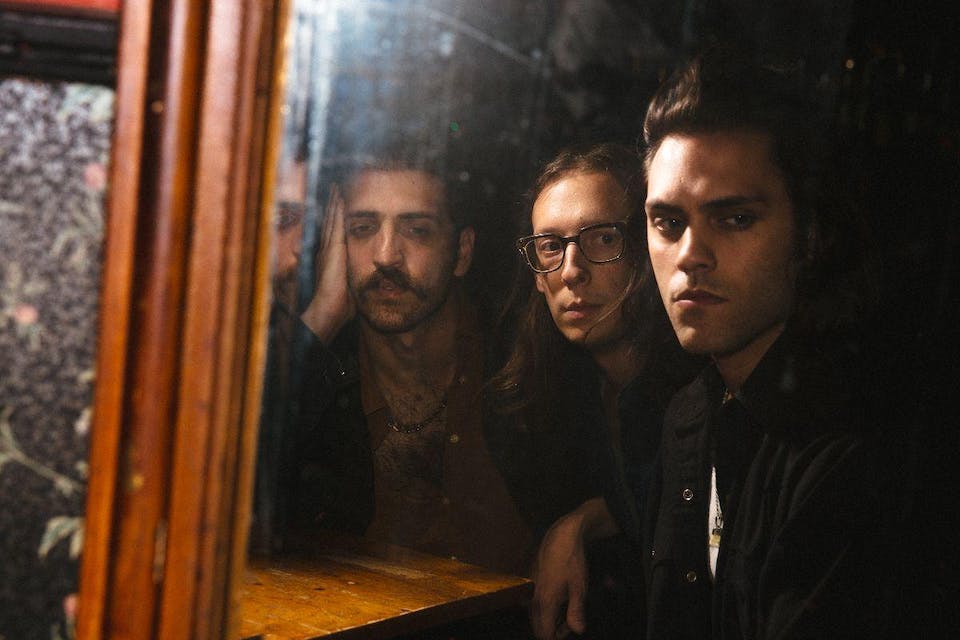 iCal
Google
BAMBARA at THE ECHO on MARCH 7, 2020 with BOAN, and DANCING TONGUES

Bambara's post-punk has always had a sleek sort of menace to it, a taut rhythm section wrapped in psychedelic noise. It's mesmerizing to listen to, and seeing the band live is an experience wrought from sharp curves and frontman Reid Bateh's rapturous baritone.

There's no end to the malevolence, from early Swans' back-basement seething to the dark triumphalism of stadium- goth, but-- Georgia boys that [they] are-- there's a thick streak of black-of-night country swirling around in the tempest, too.

Shadow On Everything is one of the year’s most gripping listens.

BandcampBambara hail from Athens, Georgia, famously home to REM and The B-52’s, but what they do is far noisier, angrier, scarier. They sound like a band always on the lookout for something bigger

Founded in Athens, Georgia by twin brothers Reid and Blaze Bateh, and bassist William Brookshire, Bambara have been steadily attracting attention since the release of their 2013 debut. Earning praise from places

like Pitchfork, NPR, VICE, Bandcamp, Spin, DIY, BrooklynVegan and The Quietus, and touring non-stop in the US and Europe with like-minded artists like IDLES, METZ, Girl Band and Daughters, the band released their most celebrated album to date in 2018 with Shadow On Everything, a release that NPR dubbed a "mesmerizing western, gothic opus." Today, Bambara are announcing their follow up Stray (due out via Wharf Cat on February 14th, 2020), with the premiere of the album's first single "Serafina" on the FADER.

A thunderous squall of a song, "Serafina" provides an arresting introduction to the album. Channelling the anarchic energy of The Birthday Party and Gun Club, in combination with Reid Blateh's dramatic lyrical style the track imbues the story of a pair suburban misfits with apocalyptic weight. Bambara's rhythm section rattles and bursts behind a frantic descending guitar lead as Reid, in a fraying baritone, weaves a tale set in his home state of Georgia that acknowledges the history of the place with subtle Civil War allusions, while conjuring an immediate atmosphere of backwoods unease. As Reid tells to FADER, it's a song built to communicate an unhinged energy.

"Stray is a death-obsessed album," says Reid. "Most of the songs are about different characters’ futile attempts at living meaningful lives under the weight of imminent annihilation. I wanted "Serafina" to feel different. I wanted the song to radiate a sort of wild-eyed hope. A youthful disregard for death itself. Serafina and Sadie live exactly how they want to live, exploring their love for one another before a backdrop of flames. The knowledge of their own mortality takes nothing from their enthusiasm for life. If anything, they see it as a challenge they might one day overcome together. When they say, “We’ll never die” I want it to feel like they might actually have a shot."

Bambara are embarking on a UK tour that begins in Bristol at the Simple Things Festival on October 19th. Additionally, they are today announcing a Brooklyn show at St. Vitus on November 8th and a full US tour in support of the album to take place in 2020. Full details can be found below.

One thing you won’t be able to avoid on Bambara’s Stray is death. It’s everywhere and inescapable, abstract and personified. Death, however, won’t be the first thing that strikes you about the group’s fourth album. That instead willbe its pulverising soundscape; by turns, vast, atmospheric, cool, broiling and at times – as on stand out tracks like “Sing Me To The Street” and “Serafina” – simply overwhelming

The album began when the band locked themselves in their windowless Brooklyn basement to write. Despite the success of their preceding full length, Shadow On Everything, Decisions were made early on to experiment with new instrumentation and song structures, even if the resulting compositions would force the band to adapt their storied live set, known for its tenacity and technical prowess. Throughout the songwriting process, the band pulled from their deep well of creative references, drawing on the likes of Leonard Cohen, Ennio Morricone, Sade, classic French noir L’Ascenseur Pour L’Echafraud, as well as Southern Gothic stalwarts Flannery O’Connor and Harry Crews.

Once the building blocks were set in place, they met with producer Drew Vandenberg, who mixed Shadow On Everything, in Athens, GA to record the foundation of Stray. After recruiting friends Adam Markiewicz (The Dreebs)

on violin, Sean Smith (Klavenauts) on trumpet and a crucial blend of backing vocals by Drew Citron (Public Practice) and Anina Ivry-Block (Palberta) Bambara convened in a remote cabin in rural Georgia, where Reid laid down his vocals.

The finished product represents both the band's most experimental and accessible work to date. The addition of Citron and Ivory-Block’s vocals create a hauntingly beautiful contrast to Bateh’s baritone on tracks like “Sing Me to the Street”, “Death Croons” and “Stay Cruel," while the Dick Dale inspired guitar riffs on “Serafina” and "Heat Lightning" and the call-and-response choruses throughout the album showcase Bambara’s ability to write songs that immediately demand repeat listens.

While the music itself is evocative and propulsive, a fever dream all of its own, the lyrical content pushes the record even further into its own darkly thrilling realm. If the songs on Shadow On Everything were like chapters in a novel, then this time they’re short stories. Short stories connected by death and its effect on the characters in contact with it.

But it would be wrong to characterize Stray as simply the sound of the graveyard. Light frequently streams through and, whether refracted through the love and longing found on songs like “Made for Me” or the fantastical nihilism ondisplay in tracks like the anthemic “Serafina,” reveals this album to be the monumental step forward that it is. Here Bambara sound like they’ve locked into what they were always destined to achieve, and the effect is nothing short of electrifying.

Stray will be released on Wharf Cat Records on February 14th, 2020.