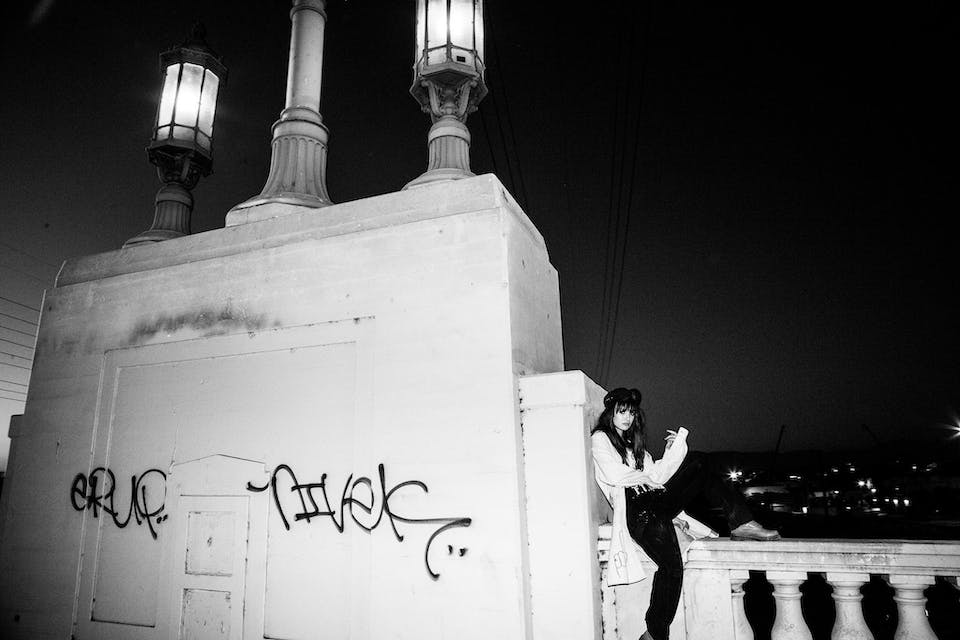 "Full of poignant reflection and intelligent storytelling, not to mention the sensational melodies and singing, the collection is a powerful statement for this ambitious pop star." - The 405

Chapter 1 is a collection of three powerful songs (“Penny Lane,” “American Hustle,” and “Hey Dad”) that not only marks the arrival of an impressive, exhilarating singer and songwriter but also mines Castle’s own incredible personal story to offer an honest, intimate portrait of self-discovery.

Born Christina Parie in Australia, the 23 year-old sounds wise beyond her years because she’s already spent nearly a decade in the spotlight. Starting out on Australian national TV at age 14, she was subsequently signed to Warner, dropped of out high school, and began her music career.

Shortly after turning 19, Castle bought a one-way ticket to Los Angeles, where early luck came quickly. “In the first six months of me being in L.A.,” Castle says, “I found myself in a whirlwind.” Before long, she was collaborating with some of the world’s most recognizable artists, including Travis Barker and legendary songwriter Linda Perry.

Castle accepted a gig to tour the world as backup singer and keyboardist for Mikey MikeMike. It was that experience—spending weeks on the road supporting Yelawolf and Run The Jewels — that allowed Castle to discover what she wanted her own music to sound like.

Park City, Utah native, OSTON's first project is called “Sitting at the Kids Table.” It’s a group of songs about love, insecurities, and coming into your own. When OSTON first moved to Chicago, she started working with a team that she loves, but along the way always felt like the little kid of the family. Everyone was more seasoned, more creative, and further along in their careers. She was told to wait her turn and she did. Now she's here. So, here it is… an open book detailing her journey so far. If you listen, she hopes you feel as awkward and confused as she did writing it… but she hopes it makes you smile!"

Most young female singers of today get their start on YouTube playing acoustic covers of hits and idolizing figures like Marilyn Monroe — this is quite the opposite of up-and-coming singer/songstress Sage Charmaine, who instead pulls her musical inspiration from emo-rock royalty groups like My Chemical Romance, chill vibes from the likes of Tame Impala and her favorite rappers like Trippie Redd. This makes for the perfect combo of melodic urban pop with equal parts honesty and edge, mixed with sophisticated lyrics on par with Taylor Swift overtop Beyonce beats.The 16 year old artist pens relatable sexy tunes teaming with wit, a bratty IDGAFrick attitude, bubble gum sweet melodies and vocals dripping with all things feminine.

Where other artists rely on a fashion stylist or creative director to guide them — Sage chooses her own concepts and themes. Be it songs, lyrics, or hair colors — Sage knows exactly what she wants.

As her first foray in the entertainment industry, Sage starred in National TV commercials for Verizon, Honda, Famous Footwear and more, and has also appeared in multiple web series and even a virtual reality game. She also formerly appeared on Nickelodeon’s well-known show, “Victorious,” alongside Victoria Justice and Ariana Grande. From her acting ventures, Sage has taken her experiences and used them to guide her songwriting. She says, “Acting has helped me place myself in another person’s mindset, the more opposite from me — the better. I’m interested in finding strength in all experiences and environments — from all people and walks of life.”

Even with her acting success, Sage has always known she wanted to be primarily a musician, having learned to play guitar and piano as a child, and taking a liking to musicians like Johnny Cash at a young age. Sage formerly released songs dating back to when she was just eleven — but found herself in the process of fine-tuning her sound as an artist, growing into her present day sound: melodic urban pop with bubble gum trap beats. Sage is excited to share her music to empower others: “I feel like I’ll finally be able to showcase who I really am and what I’m all about.”

Her debut single for the project, “Cherries” which Sage dubs simply, “a song about kissing” was released in December 2017. The song was co-written with Myah Marie Langston (famously known as “Britney Spears’ actual singing voice”). The song premiered via Atwood Magazine and was featured on Spotify’s Discover Weekly Playlist and received support via Girl Gang Music, and HillyDilly. She has also been featured in Galore magazine several times, featuring her love of fashion and affinity for makeup and performed in 2018 at the Galore Halloween Party. Her second single, “Not Really” was released in early 2018 and received support from Popdust, Kick Kick Snare, Indietronica and LadyGUNN — who dubbed her the “New Teen Halsey.” The video for “Not Really” was premiered in Galore magazine, with a feature about Sage hiring a female production crew.

Her next single, “June” was released in tandem with a music video directed by former Britney Spears Creative Director and long-time dancer, Brian Friedman. Tessandra Chavez (So You Think You Can Dance?) choreographed a contemporary dance featuring teen dancers Sean Lew and Kaycee Rice (JLo’s “World of Dance”) — The video went viral and the song currently has just under 1 Million spins on Spotify, and is growing daily.

Sage Charmaine’s initial singles were produced by multi-platinum and double diamond producer PJ Bianco who has created hits for Nick Jonas, Demi Lovato, LP, and popular synth-rock band who just completed a tour with mega act Panic! At The Disco, A R I Z O N A. After releasing a song featuring infamous female rapper cupcakke, and a remix of her first single, “Cherries” with Rocky Lynch (Of The Driver Era and formerly R5), Sage spent most of 2018 on the road playing cities like Las Vegas, Phoenix, DC, New York City, Philadelphia, Boston, Baltimore, Reno and Sacramento. She also started 2019 off with a Canadian tour with bad-girl rapper Bhad Bhabie, and a premiere of her first single from her then forthcoming EP, “Ashes” (produced and co-written with Rocky Lynch) in Billboard magazine.

Sage’s debut EP, “don’t leave me” was released on all platforms on May 3rd featuring songs co-written and producer by Rocky Lynch, multi-platinum producer PJ Bianco, a feature by lil aaron and a co-write with Interscope’s Alexander 23. She performed at several showcases the week of release, including Los Angeles’ famed Emo Nite at The Echo, followed by a four city mini tour with Hey Violet, which included a sold out show in Los Angeles, at The Troubadour.

indie singer-songwriter-producer, PERISH, is the sensitive femme fatale, right down to her name. after being raised in Detroit and living in Nashville for 7 years, her eclectic set of influences help create a lusty alt-pop sound her independent debut la petite mort. with Nashville producer Jon Santana was released October 13th, 2017 with several placements on network television channels such as MTV and Lifetime. PERISH is now living in LA and finishing her first full length self-produced record, to be expected in Summer 2019.