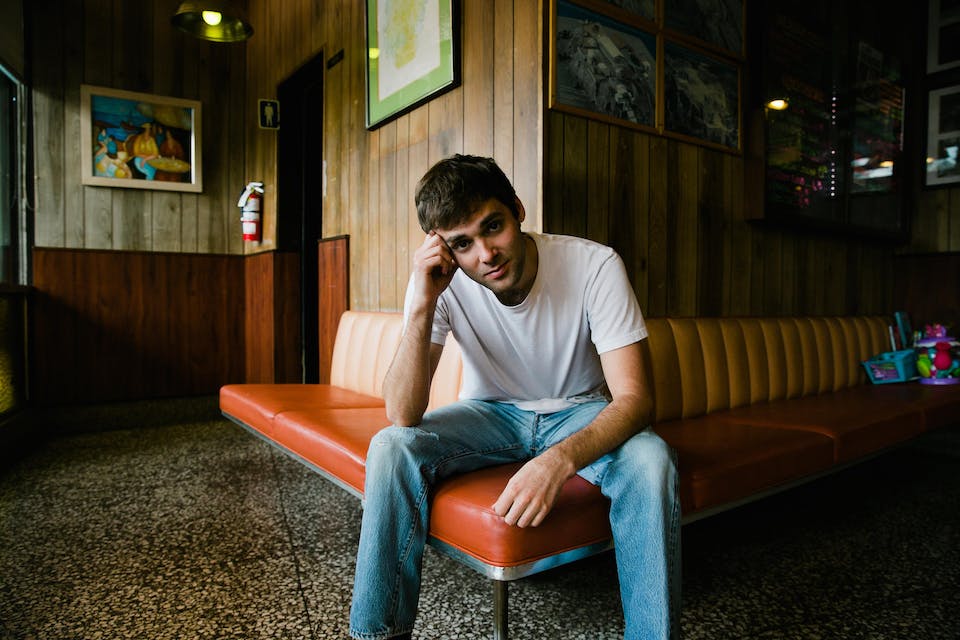 For a minute there, Jackson Phillips lost himself. Since 2015, the California native had been living and breathing Day Wave, the critically acclaimed one-man indie band he founded in his East Bay bedroom, but after years of singular focus and obsessive drive, he suddenly found himself rudderless, burned out, and questioning everything.

“When you work alone, it’s easy to get sucked into your art and let it become the center of your universe,” says Phillips. “You can get so completely wrapped up in the music that you lose all sense of who you are outside of it. It takes a lot to break from that perspective, to let go of it and open yourself up to a wider world.”

It was precisely that letting go that led Phillips to his extraordinary new EP, ‘Crush.’ Written and recorded after an extended break from the Day Wave world, the collection finds Phillips reconnecting with his sonic roots as he grapples with questions of identity and purpose, fate and independence, memory and nostalgia. The songs here are built on a structural simplicity that belies their considerable emotional depth, and the arrangements are lo-fi and dreamy to match, conveying a mesmerizing intimacy that hints at everything from Guided By Voices and New Order to The Smiths and Pavement. Phillips produced, mixed, and mastered the entire EP himself, and the end result is a raw, unfiltered look in the mirror from an artist determined to share his evolution in all its beautiful, bittersweet truth.

“The music on this EP was so personal that I felt like I had to make the whole thing by myself,” explains Phillips. “There’s something so much more fulfilling, so much more satisfying about working that way. It keeps the songs completely true to the original feelings that inspired them.”

The ability of a song to harness something as ephemeral as a feeling is what attracted Phillips to music in the first place. As a youngster, he fell in love with film soundtracks and the 90’s rock his older sister played in the car. At the age of nine, he took up drums, and at eighteen, he moved across the country to further his studies at Boston’s Berklee College of Music. Though he intended to focus on jazz, Phillips found himself drawn more to songwriting and recording, and he soon began adding keyboards, bass, guitar, and studio engineering to his repertoire in order to create and capture his own compositions from scratch. When he returned home to the Bay Area, he launched Day Wave with a series of singles and EPs that quickly racked up tens of millions of streams on Spotify and garnered rave reviews in both the US and Europe. Vice praised the music as fitting “snugly in between heavy dream pop and jangly indie rock,” while The Guardian hailed it as “downcast surf pop that makes him sound like a one-man Diiv,” and Billboard called it “sweetly melodic...the stuff John Hughes characters would have swooned over.” Buoyed by the ecstatic reaction, Phillips put together a touring band and hit the road, earning dates supporting the likes of Albert Hammond, Jr. and Blonde Redhead in addition to landing festival slots from Lollapalooza to Governor’s Ball. In 2017, Phillips followed it up by teaming with GRAMMY-winning mixer/engineer Mark Rankin (Bloc Party, Adele) to record Day Wave’s full-length debut, ‘The Days We Had,’ which Consequence of Sound declared a “dream pop gem.”

“By the time I made ‘The Days We Had,’ I’d been touring and recording nonstop for years,” says Phillips. “After I finished promoting that record, I realized I needed a

serious break. That chapter of my life was over, and I had to find meaning and identiy in something else.”

So Phillips put Day Wave on hold. He moved to LA, focused on his health, and set up a new studio space where he could experiment with fresh sounds and take on work mixing and producing for other artists. It was there that he began collaborating with celebrated singer/songwriter Pete Yorn, who invited Phillips to co-write and produce his first new album in three years, ‘Caretakers.’

“Jackson’s one of the greatest producer/multi-instrumentalists that I’ve ever known,” says Yorn, who asked Day Wave to back him up on the road and perform as his band on Fallon, Kimmel, and Ellen. “His sense of melody and his instinct for economical yet emotionally fulfilling arrangements are a blessing in the studio, and working with him has been one of the greatest joys I’ve had as a professional musician.”

Outside collaborations with artists like Yorn proved to be just the sort of change of pace that Phillips needed, and by the time touring concluded for ‘Caretakers,’ he was ready to return to Day Wave with renewed energy and excitement.

“After being away from it for a few years, I had to find my way back to what was true to the Day Wave sound,” explains Phillips. “I’d evolved as a writer and performer since the last time I released my own music, so I found that even though I approached recording this EP in the same way I did those early releases, I was naturally taking new liberties and trying new things in the process.”

That mix of comfort and growth is obvious from the outset of ‘Crush,’ which opens with the aptly titled “Starting Again.” Like much of the EP to come, the track floats on a bed of arpeggiated guitars and lush synthesizers as it walks the line between hopeful optimism and wistful melancholia. While such mesmerizing arrangements have long been a trademark of the Day Wave sound, they’re complemented here by a newfound vocal dynamism from Phillips, whose subtle growth as a performer lends an understated weight to EP’s emotional soul searching. The driving “Potions,” for example, explores our innate attraction to the unhealthy, while the hypnotic “Empty” examines the excuses we make to avoid vulnerability and commitment, and the stripped-down piano balled “Crush” reflects on the ways in which we carry people and places with us long after they’re gone.

“I’m really just trying to make sense of things for myself with this EP,” explains Phillips. “It’s easy to feel isolated, like your thoughts don’t matter or that you’ll never be good enough, but writing these songs was my way of trying to rid myself of those toxic ideas and open myself up to a better way of living. It was my way of trying to figure out who I really was.”

Like the rest of us, Jackson Phillips may still be out there searching for the answers to life’s big questions, but with ‘Crush,’ he’s found something even more valuable: himself.