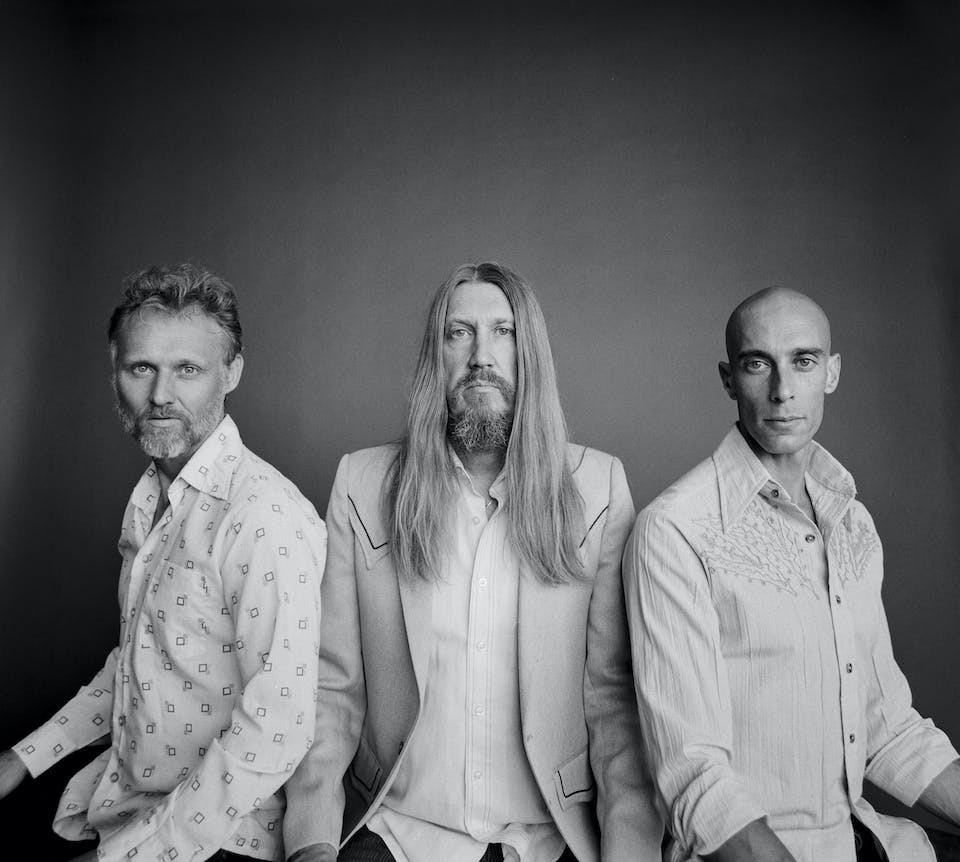 The Wood Brothers didn’t know they were making a record. Looking back, they’re grateful for that.

“If we had known, we probably would have been too self-conscious to play what we played,” reflects bassist/vocalist Chris Wood. “At the time, we just thought were jamming to break in our new studio, so we felt free to explore all these different ways of performing together without worrying about form or structure. It was liberating.”

Recorded live to tape, those freewheeling, improvised sessions became a vast pool of source material from which The Wood Brothers would go on to draw ‘Kingdom In My Mind,’ their eighth studio release and most spontaneous and experimental collection yet. While on past records, the band—Chris, guitarist/vocalist Oliver Wood, and drummer/keyboardist Jano Rix—would write a large batch of songs and then record them all at once, ‘Kingdom’ found them retroactively carving tunes out of sprawling instrumental jam sessions like sculptors chipping away at blocks of marble. A testament to the limitless creativity of the unharnessed mind, the record explores the power of our external surroundings to shape our internal worlds (and vice versa), reckoning with time, mortality, and human nature. The songs here find strength in accepting what lies beyond our control, thoughtfully honing in on the bittersweet beauty that underlies doubt and pain and sadness with vivid character studies and unflinching self-examination. Deep as the lyrics dig, the arrangements always manage to remain buoyant and light, though, drawing from across a broad sonic spectrum to create a transportive, effervescent blend that reflects the trio’s unique place in the modern musical landscape.

“My brother came to this band from the blues and gospel world, and my history was all over the map with jazz and R&B,” says Chris, who first rose to fame with the pioneering trio Medeski Martin & Wood. “The idea for this group has always been to marry our backgrounds, to imagine what might happen if Robert Johnson and Charles Mingus had started a band together.”

‘Kingdom In My Mind’ follows The Wood Brothers’ most recent studio release, 2018’s ‘One Drop Of Truth,’ which hit #1 on the Billboard Heatseekers Chart and garnered the band their first GRAMMY nomination for Best Americana Album. NPR praised the record’s “unexpected changes and kaleidoscopic array of influences,” while Uncut hailed its “virtuosic performances and subtly evocative lyrics,” and Blurt proclaimed it “a career-defining album.” Tracks from the record racked up roughly 8 million streams on Spotify alone, and the band took the album on the road for extensive tour dates in the US in Europe, including their first-ever headline performance at Red Rocks, two nights at San Francisco’s legendary Fillmore (captured on their 2019 release, ‘Live At The Fillmore’), and festival appearances everywhere from Bonnaroo to XPoNential.

Following their incendiary set at Third Man Records, NPR Music named Birds of Chicago one of the Best of Americanafest 2018. The band continues to ride a swell of good mojo that they’ve enjoyed in the Americana world since their inception, with live shows that alternate between moments of hushed attention and wild, rock and soul abandon.

Birds of Chicago have been riding a swell of good mojo in the American world since their inception in late 2012. With their new album, Love in Wartime, they are set to both confirm that roots world buzz, and break on through to a wider audience across the world.

Recorded in Chicago against a backdrop of bewilderment, deep-divide and dread, Love in Wartime is a rock and roll suite with a cinematic sweep. Co-produced by Nero and Luther Dickinson (North Mississippi Allstars), it evokes epic efforts of the 60’s and 70’s, with love as the undeniable throughline. As Russell puts it, “Any act of love is an act of bravery. These songs are snapshots of covenants, big and small, of trust and understanding. We want to give people some good news, and we want them to be able to dance when they hear it.”

When BOC released it’s last album, the Joe Henry produced Real Midnight, in 2016, critics scrambled to find the right terminology to describe the deep lyricism, gut-punch singing and fevered musicality. . . “Secular gospel” Was one phrase that caught some traction. That fervor is evident in Love in Wartime as well: “Roll Away the heavy stone/roll away the heavy hours/roll on in the summer mon/who’s alive who’s alive who’s alive?” The invitation is joyous, but urgant. . . call it “secular gospel,” or call it what they used to call poetry intoned over roots music mash-ups: rock n roll. The Birds consider themselves a rock and roll band first and foremost, and Love in Wartime doesn’t leave any doubt about that.

The Wood Brothers have partnered with Thistle Farms so that $1 from every ticket sold will go towards helping women survivors recover and heal from trafficking, prostitution, and addiction. Thistle Farms is a nonprofit social enterprise based in Nashville, TN, providing a safe place to live, a meaningful job, and a lifelong sisterhood of support. For more info, visit our webite by clinking on the links below: